In 2001, at the request of a client, the Edward Barnsley Workshop produced the first set of folding library steps. Designer James Ryan created the original design and fittingly, he took inspiration from the fluidity of the unfurling pages of a book. 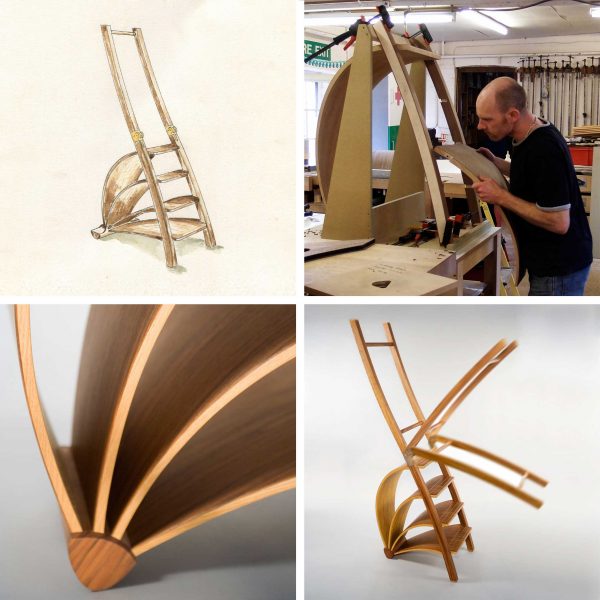 The first set of steps known as Mark I, were made by Phillip Brown and Simon Owen in 2001 and were constructed using walnut and oak with bronze fittings. Interestingly, this initial set features a hinged folding handrail, allowing the steps to be stowed neatly, or easily transported when not in use.

Owing to their eye catching and unique design, these library steps caused quite a stir when they were exhibited at Olympia in London and James Ryan realised there was clearly a gap in the market. The intrigue and interest in this unusual piece demonstrated that there were people looking for an elegant and contemporary solution to the problem of reaching objects on a high shelf.

In 2008, the design evolved and James created Mark II of the library steps, choosing to forgo the folding handrail and reducing the number of steps from four to three. The adaptation of the original design allowed for the steps to be produced in small batches – this proved to be a popular decision as when they were exhibited at the Commonwealth Institute they sold immediately.

Since the launch of Library Steps Mark I in 2001 James has designed 5 further versions, in the coming weeks we will share images and details of each design, in the meantime we would love to hear your thoughts of our Library Steps Mark I and your experience of designing or making library steps.  Please tweet us @BarnsleyWksp